Hello dear readers, this is the space where I will tell you all about me and my writing. At least that’s the idea. Let’s just say I never thought I would ever arrive at that stage.

I loved stories all my life. Even as a young child, I could sit for hours and listen to someone tell or read a story to me. I’d like to say that turned me into an avid reader as I grew older and learned to read, but it did not. I’ve struggled with dyslexia all my life, which turned reading into more of a chore than an enjoyment. But I was lucky in a way that my mom introduced me to audiobooks at a very early age. Back in the day there were called books on tape and to give you an idea, that was before I knew how to turn over a tape in my cassette player without creating tape spaghetti. My reading skills improved over the years, but I still enjoy audiobooks most of all to get my reading fix.

Growing up, I wanted to tell stories myself, so it’s not really a surprise I ended up in the media industry. Initially, I wanted to become a scriptwriter, and it’s what I applied for when I went to university. It didn’t take long for one of my professors to tell me to stop dreaming. According to him, I would never make it as a scriptwriter with my difficulties. He didn’t think I had what it took to make it in the media industry. But by that time I was quite used to people telling me I wasn’t good enough if they didn’t tell me flat out no. So I decided to stick it out but change the focus of my degree to postproduction and became a film and audio editor instead. Now, during the day, I bring other people’s ideas to live and I love it but it wasn’t enough.

My own ideas kept turning over in my mind, and they needed an outlet. Making films is a great outlet, but it involves a lot of other people, money, and opinions. So I went back to what I wanted to do all along. I wrote. Just me and a notebook. If I didn’t tell anyone about it, no one could tell me I didn’t have what it takes, right?

Well, I was never good at doing things halfway, even if I did them just for myself. I learned about a one hour writing workshop at ELLCon in August 2018 hosted by Brey Willows and Robyn Nyx. After talking to Robyn about my difficulties with dyslexia and having some problems with the English language (I’m a German native,) she encouraged me to come to the workshop. That is where I learned about the week long writing retreat both Robyn Nyx and Brey Willows ran with Global Wordsmiths. That is where my writing journey really began.

Since then, I’ve published three short stories in the Lesfic Eclectic anthology in the past three years. I’ve written and rewritten 70.000+ words on my first novel. Currently I’m trying to get through the process of editing those words with the help of my editor Nicci Robinson at Butterworth Books into something that will eventually become a finished novel.

If I’m not working or writing, I’m listening to audiobooks, which is very much one of my guilty pleasures. Another favourite pastime is walking through nature while dreaming up stories in my head or chasing the perfect frame with my camera.

Lesfic Eclectic out now! Get your copy here! 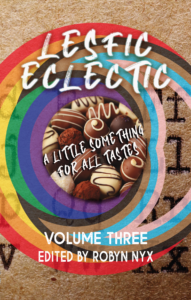